If you have an essay due on Teenage Pregnancy and if you would like to get a high standard, A grade essay on Teenage Pregnancy, you are at the right place. Below is a sample, free essay on teenage pregnancy, but because you may not be able to use it since it is published, you can order a custom essay from our our essay writing service at https://customessaysservice.com/essay-writing-service/ or visit our home page at https://customessaysservice.com.

Teenage pregnancy has become a rather worrying phenomenon in the recent years. It has been estimated by the CDC (or the Centre for Disease Control and Prevention) that the United States, with 400,000+ teenage pregnancies in 2009, is leading country in this aspect among the developed world countries. 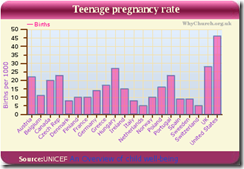 This report also points out that the main reason for teenage pregnancy among the 15 to 19 age group is the total lack of any type of contraception aids. About one third of these girls thought that they could not get pregnant at the time.

It has been observed that in societies where teenage marriages are rarer as in the developed countries, the reasons for teenage pregnancy are:

There has been much research in the socioeconomic, medical, and psychological bearing of pregnancy and parenthood among the teenagers:

Teenage mothers tend to have more children generally than others; they lag two years behind others of their age group in completing their education, and are more likely to live in poverty; and teen mothers are more likely to return to their substance abuse habits.

The problems of teenage pregnancy extends to the next generation also: the babies of teenage mothers face greater developmental problem risks, and while the girl child of teenage mothers also tend to become a teen mother herself, the boys are rated to have a higher percentage of arrests and jail sentences.

Teenage pregnancy prevention programs such as: abstinence education programs that counsel young people to wait until they are mature enough or married to have sex; knowledge-based programs that provide detailed birth control information and how to prevent sexually transmitted infections (STIs); clinic-based programs conducted by health care providers in schools provide kids with as easier access to information and birth control services; and peer counseling programs usually comprising of older teenagers , teach younger teens relationship skills, avoiding peer pressure to have sex, and how to obtain and properly use birth control.

As prevention is the best cure, preventing teenage pregnancy has to be given more importance in the families, communities as well as the school. The awareness of teenage pregnancy and its inherent problems should be part of every teenager’s knowledge. Such subjects are also frequently set as a topic for writing a term paper. If you are stumped for time or inspiration when you are  writing an essay on such subjects, just click on the link to our essay writing service or  custom writing service and  order an essay online quickly.