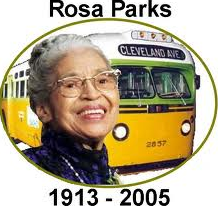 Do you need to write an essay on Rosa Parks? This is a free essay, but it may not solve your purpose as it is published already. For plagiarism-free, custom essays, get in touch with our essay writing service and order a custom essay that can help you gain better grades.

Coming back to Rosa Parks, she is called the “Mother of the Modern Day Civil Rights Movement”. She is famous for her stand against the racist policies and segregation with her action of refusing to give up her seat in a bus to a white passenger in 1955 when the seats in buses were still reserved for white people only in some states.

Her refusal to give up her seat on December 1st, 1955 may have resulted in her being put down from the bus that day, but it served as an inspiration and an example for other colored people and gathered a lot of support. The matter eventually came before the courts and Rosa Parks and other colored people rejoiced when the segregation on the buses in Alabama was banned.

Born as Rosa Louise McCauley in Tuskegee, Alabama on April 2, 1913 to James

McCauley, a carpenter and Leona McCauley, a schoolteacher Rosa Parks grew up in her grandmother’s house with her mother. Her grandparents were former slaves and Rosa was encouraged by her mother to become active in civil rights movement. Having to give up her teacher’s college education due to her mother’s illness, Rosa entered employment as a seamstress. She attended meetings of the NAACP that is the National Association for the Advancement of Colored People, where she met and married another activist, Raymond Parks in 1932.

Both of them were active in the struggle against the racist policies of the state and demanded the human right to dignity and equal treatment of the colored people. Raymond Parks, a barber by profession, worked to free the nine black defendants of the famous Scottsboro case, who were accused of raping two white women. The trial went on for twenty long years and the defendants were set free, but not before an all-white jury in the lower court convicted them and sentenced eight of them to death, although they had strong evidence to prove their innocence.

While this was going on, Rosa Parks worked with Edgar Nixon of the NAACP to organize a voter registration campaign in Montgomery in her free time. She worked on various cases involving human rights violations and being treated as second-class citizens. However, none of them were able to get the public support and general consensus as her arrest and fined for not ceding her seat in the segregated bus.

The incident brought in widespread protests and the buses in Montgomery were boycotted by the colored people. Martin Luther King, Jr. filed the case for desegregation of the buses and, finally, in December 1956, the Supreme Court declared segregation on buses as illegal. However, Rosa Parks and her husband had to relocate to Detroit in Michigan to escape the harassment and unemployment.

Recognition and Awards of Rosa Parks

She worked there in the Congressional office of the Representative until her retirement in 1988. Rosa Parks was subsequently awarded the Spingarn Medal of the NAACP in 1970, the Martin Luther King Jr. Award in 1980 and the Presidential Medal of freedom in 1996 by President Clinton. Rosa Parks lived to the ripe old age of 92 and died in 2005. She was honored even at death by permitting her body to ‘lie in state’ at the U.S. Capitol Rotunda, the first woman and second African-American to be so honored.

Discrimination, especially of colored people, is a subject of study in the humanities and HR modules in colleges and universities. Writing an essay on Rosa Parks or other topics in your course is easy. Just take the help of our essay writing service. Find out how you can avail a free essay paper from our custom essays service.