These Movie Ratings are also called motion picture rating systems. They are certifications issued some authority to classify movies according to their suitability for particular groups of audiences. Movie ratings are usually based on the issues such as the thematic content, depiction of sex, violence and substance abuse, use of offensive and vulgar language,

insolent behaviour and such other matters that are not suitable for young audiences. Movie ratings are meant for parents to decide whether their children can watch these movies safely.

Movie ratings are also given by the viewers and critics based on the likes and dislikes of the audience. These are meant for prospective movie viewers for judging the merits and demerits of the film. However, those ratings are not the subject of this essay.

Movie Ratings in the U.S.

The movie ratings in the U.S. are applied by the Motion Picture Association of America or the MPAA. This association is made up of a group of parents who judge the suitability of the movies submitted to it for rating. In other countries, the movie ratings are provided by a censorship board or film review boards constituted by the government. But in other countries, the ratings are given instead of censorship. 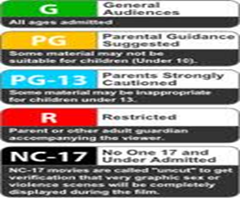 Let us see the movie ratings existing right now in the United States. There are five categories of ratings given by the MPAA. The first one G or the general category, is suitable to viewed generally by all ages of audience and contains no objectionable material. PG rating, suggests parental guidance for children as some material in the film is found unsuitable for young children. PG-13 cautions the parents of children below 13 years of age, as some parts of the movie is inappropriate their children.

The next category is the R or restricted group of films which can be viewed by children under 17 years of age only if they are accompanied by an adult. The last category is the NC-17 that does not allow anyone below 17 to view these films. There are also films that are unrated and marked as NR or not rated. The film makers in the United States have an option to submit their films for the rating or not. So some films are unrated.

Movie Ratings in other countries

In other countries like in some European Asian and Middle Eastern countries, the governmental censorship can decide who can view the films. It can also delete or cut out objectionable parts.  Or even ban whole movies from being viewed by anyone in the country. The ratings in these counties could be roughly about the same as that of the United States, except for this. Moreover, the state controlled rating or censorship requires that all the produced films must be submitted for screening and rating by the board mandatorily.

Writing a term paper on movie ratings and similar topics is easy if you have an essay helper. Our essay writing service will also be delighted to write custom essays on topics of your choice. Just click the link to order an essay online and start getting truly custom papers. You can also check our research paper writing service at http://customessaysservice.com/research-paper-writing-service