Dr. Seuss and his books

Born in 1904, Dr. Theodor Seuss Geisel or Dr. Seuss as he was popularly called, wrote more than 60 books for children before his death in 1991, out of which 46 books have been published and four have been adapted for making feature films, eleven for television specials, four for television series and one for a Broadway musical. Generations of children have loved his books and these books remain their favourites long after they have grown up. Because of this Dr. Seuss books are considered as classics.

There is a complete section of the Universal Studios Islands of Adventure theme park that is based on the books written by Dr. Seuss. 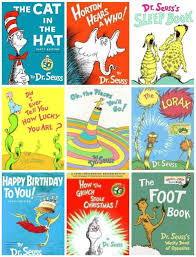 Some of the most famous of Dr. Seuss books

The most famous of Dr. Seuss books include bestsellers like Green Eggs and Ham, The Cat in the Hat, One Fish Two Fish Red Fish Blue Fish, Horton Hatches the Egg, Horton Hears a Who!, and How the Grinch Stole Christmas!. The books Horton Hatches the Egg and And to Think that I Saw It on Mulberry Street won him the Lewis Carroll Shelf Award.

The uniqueness of Dr. Seuss books

Dr. Seuss books are characterised by the illustrations that he himself drew, of his droopy but lovable characters. The figures he drew might have been drawn by children themselves. That made the books more liked and read by children who loved to copy his sketches of their favourite characters.

Another particular that attracted children to his books was in the construction of his verses – they had words that were funny, like the names he gave his characters, places, and his very titles, as well as the poetic meter that he employed that made it fun and easy for the children to read, recite and enjoy. Most stories had morals that were not blatantly apparent but only indirectly implied because he realised that most children are averse to reading  moralising stories.

The Cat in the Hat, for instance was written using hardly 250 of the most common words that first graders in the United States are able to read. This was a challenge posed to him by the Houghton Mifflin text book publishers: to write a book that children will not be able to put down using just these words. This book remains a best seller along with his other books like Green Eggs and Ham, and One Fish Two Fish Red Fish Blue Fish. These books are outselling other newly published books even now, showing the timeless appeal of Dr. Seuss and his lovable characters.

The four feature films adaptations of his books include: How Grinch Stole Christmas, The Cat in the Hat, Horton Hears A Who!, and recently The Lorax that has made a sensational opening this month.

It was easy for Dr. Seuss to write his books. But most students usually struggle with their assignments. Writing an essay of the narrative type is normally one of the mandatory requirements for all students, right from school. If you are still stumped with your narrative essay, let our essay writing service write your custom papers for you. Click on the link to make use of our custom writing service and order cheap essays that are up to the required standards.