Borderline Personality Disorder, or BPD for short, is a type of mental disorder. It is characterised, like the other personality disorders, by a predictable pattern of thinking, feeling, and interaction with others. These have a tendency to affect the sufferer in a substantial manner.

What is Borderline Personality Disorder?

The person suffering from Borderline Personality Disorder is not able to function adequately in society. This is due to the changing patterns in his self-knowledge, feelings, social behaviour and in forming relationships with others. This disorder is also only markedly noticeable in the adolescent or adult years. 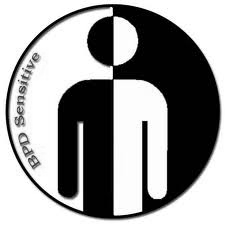 The name borderline refers to the historical categorisation of this illness as being on the borderline between the neuroses or mood problems and psychosis or reality distortions because the symptoms for both these disorders are seen in Borderline Personality Disorder. This disorder was finally recognised as such in 1980. It is now known that while the symptoms could be common with those disorders, the development of the illness also depends on other personality disorders that could be prevalent in the families of the sufferers. It has been calculated that about six per cent of the population are affected by Borderline Personality Disorder and it can be seen equally in men as well as women.

People with Borderline Personality Disorder are observed to be afflicted with persistent patterns of emotions that are unstable. According to PubMedHealth website, such “inner experiences often cause them to take impulsive actions and have chaotic relationships.”

The actual causes for Borderline Personality Disorder are still not completely understood. There is a belief that problems like social factors, family instability and genetics are some of the key factors. Risk factors for developing Borderline Personality Disorder include: being abandoned as a child or during the teenage years, unsettled and disturbed family background, poor family communication and sexual abuse.

Mayo Clinic lists out the symptoms such as “impulsive and risky behaviour (observed in) risky driving, unsafe sex, gambling sprees or illegal drug use; inappropriate anger; intense but short episodes of anxiety or depression.” A person with Borderline Personality Disorder usually swings between the two extremes of feelings and thoughts about people and situations, seeing things as being absolutely good or downright bad. But these feelings tend to change suddenly and lead to difficulties in forming stable relationships with others.

Other symptoms of Borderline Personality Disorder include: the dread of being abandoned; feelings of desolation and tedium; recurrent exhibitions of misplaced anger; recklessness with money, substance abuse, sexual relationships, binge eating, or shoplifting; uneasiness of being by oneself as well as frequent traumas and turns of self-injury, such as wrist cutting or overdosing.

Treatments include talk therapy, group therapy and regular visits with qualified and expert clinicians. Medications help to stabilise the mood swings and also treat depression. In the recent years the prospects for improvement or recovery from the condition are considerably brighter.

Writing a term paper on disorders like Borderline Personality Disorder may be difficult if you find yourself short of time or resources. You would need an essay helper in such cases. If you feel that this is all complicated and difficult, our academic writing help is ready to provide you with custom papers on the topics of your choice. Our professional writing services are made up of highly qualified writers who can supply you with plagiarism-free research papers. Visit us at https://customessaysservice.com/research-paper-writing-service/